My last blog post was a bit of a downer. I’ll try to cheer up on this one. I seem to have created a theme of chronicling end of pubs. The travails of the pubs as they cope with a continual series of operational changes and lockdowns hoisted on them by a government that appears floundering with how to bring infection rates down during a pandemic. Hospitality being the main target. As each measure fails to alter the numbers, shut it down! As has happened here in Greater Manchester.

It’s worth an aside to explain my temporary conversion to in Tandlemans own words “nearly a pub man” Since my work life recently restarted in the Covid era of working from home, life lacks attributes it once had. Sometimes for the better and some for the worse. I might not miss driving across motorways to see the delights of our Northern cities or getting trains into the centre of Manchester. I might like a morning of shower, coffee, trackies on, plough through the job and knock off early having had few distractions. But I miss the day to day with colleagues distracting you. The better gigs of contracts past always balanced a day or two in an office with colleagues and the rest of the week at home. You compensate. Get out for a walk at lunchtime and not every day simply knock off to watch documentaries about aliens and UFOs on Blaze. I’ve taken to occasionally wandering out for a pint. It’s a walk and well a pint. Neither of which are bad. Nearly a Pubman. 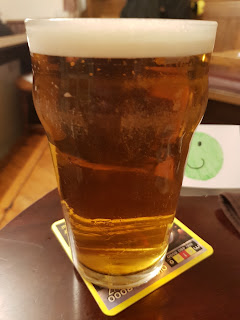 And so, I knocked off to chronicle the last day of pubs. As I observed them open, I shall observe them close. If you are expecting a depressing tale of woe, this is not one. The pubs I popped into were busy, vibrant and full of people enjoying themselves. A Wetherspoons was busier than I expected having seen it dead of late. Workmen getting messed about as they were split into tables of six despite working together all day and attempting to get their ping curries sent to new table numbers. People doing their best to remain good humoured despite knowing the rules are bollocks. I gather the Spoons may not be shutting and will report back when I discover what the smallest meal is considered substantial and the maximum number of pints you can have with that. I will let you figure out the logic behind all this nonsense.

It is the proper pub you are interested in though, so I will tell you about that. Is it always this busy on a Thursday night? I gather not but regulars had come out for their last pub visit for what the landlady told me she expected to be a month. There was space, though to enjoy the table service. For the cask warriors, there was one pump clip as the pub had been operating like the last day of a beardie beer festival and planning on running out. Rows of turned around clips showed the nonpandemic business model. The cask had run out by 8 leaving only lager, cider, bottles. A fair few turned to Gin as expect we all will. Far from a downbeat mood the pub had upbeat vibe and element of gallows humour. They expected to reopen. There was no downer. The place lifted my mood,

I wandered home. It isn’t the end, just yet. This latest knock will knock some places for six and miss others. Some are better placed than others to get up after taking a knock. Will there be pints before Xmas? Will Boris play the politics of giving us a Xmas present? Will the numbers extend the closure into next year? I have no more idea than you, but that’s that for a swift one after a day at home. Back to Ancient Aliens on Blaze and hoping for one about Hitler. The ones about Hitler are the best ones.

Here I was waiting for the grand uprising. Hospitality in Liverpool and Manchester staying open in defiance of Tier 3 regulations.

But no, it was obvious bluster. The government tweaked the money they were throwing out and everyone seems to have meekly accepted it.

It seems money was the key. The hands have been greased at the expense of lubricating the mind and soul.

Every time the government decrees that the pubs must close, some will never reopen.

And in Wales they're now saying they're going to need a second "circuit-breaker". Still, everyone will have advance warning to stock up on writing paper and underpants.