As the news of 10pm closing for pubs indicates that from Thursday what is commonly referred to as a curfew is coming into effect, questions must be asked. Whilst it really just looks like early doors closing rather than a proper curfew, that doesn’t make it better. I mean, as far as I can see the Covid Marshalls are not going to be armed and taking down perps who dare to be out and about and 5 past 10. Not yet. You will not have to run a gauntlet to go to the late-night garage for snacks and be prepared to fight your way back home. However, given time. The journey is but a set of small steps. How long until the Covid Marshals are in black leather and armed with assault weapons ready bang on 10pm for those sneaking a cheeky nightcap?

Some of the more classically educated of you may indeed be reading Xenophon’s Anabasis for strategic ideas of how to get out of enemy territory of the pub beer garden and home to big sharing bags of crisps and a fridge of cans. Some of the less read may look to movies inspired by this like The Warriors. If you can get your gang across New York, by hell you can get home after 10pm from the Pig and Ferret and leave any Covid Marshall sorry they ever encountered your march of the 10 thousand. 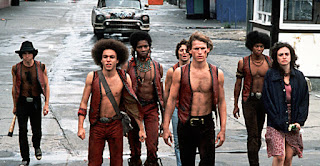 I am not here to discourage such research. It may indeed prove worthwhile to prepare for the coming of a police state seen only in works of fiction. All government gains its authority from the application of legitimate force. A monopoly of violence. If you want to be out after 10 you may need to prepare to avoid or meet that contingency.

But I wish to propose a peaceful solution. A way to beat a gormless ineffective authority at its own game. Of late sovereign individuals have been abandoning the ways of state laws, regulations and currencies. Why not abandon state time? Why stay on GMT or BST?

Let’s adopt British Timbo Time. It’s simple. We all set our watches an hour earlier. We get Timbo to turn the smooth bitter taps on an hour earlier. Time is what we say it is. Boris may say it is 10pm. We know it is 11pm BTT. Why should we let the government dictate when it is 10pm? It is 10pm when we want it to be 10pm. If enough of us decide that right now this minute, it a 6am then by hell it is 6am.  British Timbo Time. By the people, for the people!

Excellent suggestion. Hope it catches on.
And thanks for the pointer to Xenophon's Anabasis (which I admit I'd never heard of) - sounds like a cracking good read.

You've reminded me of the old story about an eminent philosopher who was approached in the street by a foreign tourist who asked "Please, what is time?". The philosopher replied "that is a very complex subject and I have a lecture to give so I just can't go into it now".