As we get into month 3 of this 3-week lockdown, are you all still missing pubs, or have you accepted they are now gone and most likely most of them are gone for good? How much of a reduction in turnover is involved in 2m social distancing and customer reticence? What percentage drop in trade makes any business unviable? Never mind, though eh? We still have cans of cheap supermarket lager and as per my last post, pretty decent options for pub bitter in the form of 5l kegs. If you miss draft (spelling copyright the pub curmudgeon wind up society) pub bitter, I’d give that option the thumbs up. Crack on.

I could explore this further and go into growler fills of takeaway pub beer, but I’ve been put off that malarkey by none other than the CAMRAs. Here we go, blogger slags off the CAMRAs but not at all, I come to praise them. On the occasions I delved into beer geekery to volunteer for a CAMRA festival or two I much enjoyed the experience and the people involved and understood why people get involved in such things. Why do such a thing? By trying it out, I got it. I understood what a volunteer gets out of it in terms of being part of an impressive project and team of people and civic area you may or may not have developed an attachment to. It’s an education, the CAMRAs, in there among the propaganda. Of course, I could be cynical and mention volunteers get free beer, but the price of beer would not compensate for time in any labour market. One of the observed rituals was at the end, when it’s all done and dusted volunteers fill up plastic containers with whatever is left over to take home as breeched casks are poured away. Didn’t seem desirable to me but I joined in to see what it was about. The thing is after a beer festival I was a bit beered out and I didn’t really want beer for at a least a week so my milk carton of beer sat in the fridge for a few days and by then it was past its best. Shelf life is important. Whilst cider is not really my drink, that lasts, so these days, if I were to sign up for one, I would only help myself to few pints of that. It’s fine with ice and a dash of Vimto the following weekend and as it tends to veer towards tramp’s strength a four pinter can get you a long way. So, buying take homes of beer that doesn’t keep isn’t my bag.

The 5l ale keg was far from long dated, but you had a month before you had to open it and once opened had 3 days minimum. That was cope able. I gather the fact that the ale is “Realish” is a factor in it lasting 3 days. An unpressurised keg of stabilised beer is to be drunk that day. I’m a boozer but I’m not sure I need the pressure to neck it in a day. The choice to neck it, not the pressure to do so. 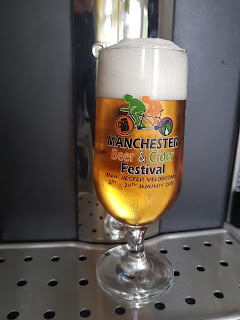 But this is where my thoughts turned to beer geekery past. Years ago, I bought a keg chiller/dispenser and had brought it down from the attic to keep my ale keg cold. It was never going immediately back up there. Time to relook at the pressured beer keg options on the market. These days there appears to be a few choices for draught beer systems in the home. The Blade is pricey and seems geared for small cafes but a quality nice looking gadget. The Sub seems more geared for the home but at 2 litres an under capacity for any social gathering where the point is to show off a new gadget. Pint lads? Ok but just the one as then its run out.

When I was playing about with my 5l gadget I discovered it worked well with the pressurised Heineken style now branded “beer tender” and worked poorly with the unpressured kegs and required a lot of CO2 cartridges across the life of a keg. The Heineken style at the time was clearly the best system but seemed limited to Heineken and whilst that’s a lager I like, a constant diet of it is not even on my cards. The Heineken system is a contained system that works well without a dispenser coming with the bits to dispense straight from the keg. Further, even at the time, the price for the beer in the pressured keg was about twice that of the discounted cans and bottles in every supermarket. It wasn’t the value option I like to plump for. But you did get a lot of free Heineken glasses, all of which are still in my attic and denote the Champion league years the promotion ran for.

The Chambrer chiller I got back then seems to have been superseded by better ones. I don’t know how good they are dispensing the unpressured kegs with a separate CO2 cartridge. Some decent beers are in that format and I’d be interested in comments if you have a decent model that does this well. That is keeps the keg fresh and dispenses with CO2 and doesn’t eat cartridges by releasing gas. That would be the only reason to bin off the Chambrer.

The recent developments in the pressured keg front appear to be that there are a wider range of beers in this format, likely little to excite geeks, but enough to entertain me in a form that offers draught beer that lasts a month when tapped, pours with carbonation and foam. It’s all priced cheaper than pubs but more expensive than bottles and cans. Most of the choices are Heineken brands the format has extended over. As spoons is shut, might as well blow the government furlough cash on beer tat. 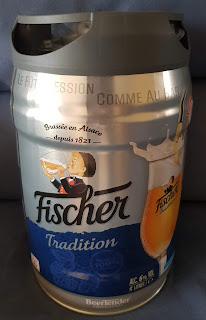 Kegs are the future

I put on a Keg of Fischer Tradition. A 6% Alsace lager made by Heineken priced at £19.99. The Keg ran for about a week before I’d necked it and maintained a full fresh condition to the end. Wiki has a mention of the Fischer brewery and when Heineken got their evil mitts on it. As for the lout? Top stuff in my humble view. I’d buy one if Timbo stocked it. A clean crisp balanced pint of lout. Similar to Kronenbourg but with a bit more of that Alsace spice note on the hop. Cereal backbone giving a body that whilst not really full bodied wasn’t thin. Clean, light, refreshing. Dry and without a residual sweetness you sometimes find at the stronger end of lout. I liked it. I liked the novelty of pouring draft ones. I remembered the tilt of the dispenser controls foam so you can have as much or little foam as you figure it out. I liked the fact it lasted without feeling a need to finish it off. There was enough gas to blast the last liquid out, so the empty keg didn’t slap about with wasted beer. I was glad to get it out of the attic for another go.

If I wasn’t overly price sensitive, I’d use this more and it would never go back in the attic but at some point, I’m likely to balk at paying more. Until then, I’ve a few kegs to go at so I’ll see if I get bored with it. Like taking an old games console or computer out of the attic. It’s fun for a bit but will it go back up there, be taken to the tip or remain in the kitchen? Who knows?