The following is my competition entry in Zak Avery's competition, here and here and here. It comes in at 498 words, it is 2 under the limit. It is a short fictional story, involving time, time travel, beer, barmaids, pubs, philosophy, science, love and tragedy. It may be crap, but it's all I could thing of on the topic of time and beer and 500 words and it stands me as good a chance as any of a free bottle of grog. 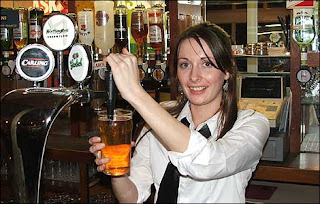 The last day of the universe

The last day of the universe is often pondered by the sciences. Among the big crunches and other theories, there is no theory that accurately explains the last moment of time. Mark Brown had a peculiar theory in regard to the nature of time. Had he any knowledge of popular physics he would have known his understanding of the universe to be at odds with either the notion of passing through time in one direction or time being a variable dependent upon ones velocity. Had he been more aware of the disciplines of philosophy or theology he might have considered his perspective to be Buddhist. Alas he didn’t. Marks understanding was that time did not exist. His view was also that nothing existed in a state of permanence. Everything was in a state of constant change, but this change wasn’t measured by time for all that existed was the moment. This view assisted Mark in his understanding of an unexpected observation when fixing his old microwave. With a spark followed by an electric shock he noticed the hot meal within had immediately chilled. Something quite at odds with what is expected when applying microwaves to last night’s meal. Mark understood he had reversed the molecular change that had previously occurred in heating the meal and in fact put the meal back in what others understood to be time. As luck would have it Mark had available a brown banana. He placed it in his malfunctioning microwave and within 30 seconds the fruit was firm and green. The consequences of the discovery were not lost on Mark. He knew immediately that riches beckoned. Though, it wasn’t money he desired, only to impress the girl of his dreams. Maria, the girl working in his local pub was, to Mark, the greatest beauty in the entire world. To Mark, she paid him no attention, and the only achievement from his visits was a hangover. Mark knew who he wished to share this discovery with. After a pint of beer in his local pub he felt emboldened to tell Maria of his discovery. Unbeknown to him Maria did reciprocate his feelings. She had wondered why he had never asked her out. She did not believe the incredulous story, but was pleased to be accompanying Mark back to his home. Mark showed her the microwave and placed another piece of rotten fruit within it. Had Mark known more about the sciences and philosophy he would have been aware that all things in the universe are connected, though he would never have noticed the growing hairline fracture in the casing. Mark was lucky in one sense. The girl of his dreams kissed him. Had he been more worldly wise he would have kissed her back. Instead he pressed start. With a spark followed by an electric shock he noticed the hot meal within had immediately chilled and he no longer knew of the kiss he had received for he was stood alone once more.

He got word that she loved him when she was just thirteen.
At first he didnt take much notice,he was fifteen and had plans to be a missionary.
For the first time in his life he felt truly happy and on target to reach achieve and even succeed all his goals in life.
Life that seemed to stretch our forever in front of him.........

But the heart is a tricky thing.....surely it wouldnt hurt to go to Sundays bible class and 'check her out',he was still on course to become a grade A preacher....

As the weeks went by,he grew fonder and fonder of this honeyhaired silken voiced angel,who looked at him with adoration,laughed at his jokes,and who if he was honest was starting to bud into womanhood in ways that even his great spiritual leaning simply could not ignore....

One Sunday in the darkened hallway that lead from the living room to the kitchen,she took a tray from him......their hands brushed each others as the hallway was dimly lit.
That brief touch of their skin on each others skin was oh so brief and obviously accidental....and yet it stayed with him all week.

Indeed even today twenty eight years later,the memory of that casual touch has the power to transport him back through time and inflame and incite all his senses,taking him to a place he could never forget,no never ever forget because although time,space and everything in the cosmos may have moved on he never ever has......