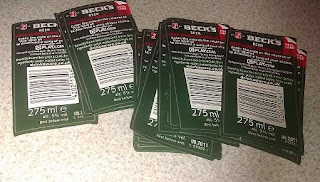 I have heard it said and both written on the blogosphere that when you buy “macro brewed brands” you are buying the advertising and marketing spend. This is true, however, of all brands regardless of scale or production. One feature of large scale production is that within economies of scale, specialisation occurs. It is possible within a large company to have people whose sole area of responsibility is a singular function, whether that is finance, IT or marketing. You may believe there to be some inherent romance to a small brewer where a small band of people are jacks of all trades and masters of none but even that small brewer will have a marketing function. Whilst that function may be part of someone’s job after they have finished sparging wort or some other unlikely sounding activity, it is still a job to put the product in front of a potential customer and give the customer a reason to try the product. That is a function the customer pays for regardless of whether the beer of choice chooses a cheap publicity stunt involving dead rats & the portrayal of our Teutonic cousins and trading partners as national enemies or a TV advertisement involving laid back Australians enjoying a cold pint of lager.

So I don’t buy the argument that the customer gets to avoid paying for marketing, by choosing “none marketed” beer. It’s all been marketed, that's how it got a distribution channel and that’s how it appeared in front of you and that in part is why you chose it. One feature I do notice is the difference in marketing of beer brands. Smaller craft beer tends to paint a picture that informs the customer of the product features. You also find a lot of crap using the words like “organic” and “carbon footprint” to paint a picture that the small scale brewery choice is an ethical choice and thus a “moral good”, but by and large the emphasis appears to be on the product itself.

This is at odds with the marketing of the macro brewers. The marketing spend appears to offer a “lifestyle” and paint an image of the product that fits in with their customer. Little is spoken about the actual product. One exception is the marketing of Beck’s beer. The marketing of this beer has long emphasised the beers ingredients as the selling point of the brew. Many myths surround beer and most drinkers are self educated in so far as they know what they like and know how much of it they can take. Some beers will be thought of as “chemic” due to a different taste profile and the fact the drinker once had a skinful & got a bad hangover. Some beers will be well thought of by the customer. Most of this is based on the drinkers own drinking experience, little is based on the image brewers try to create, and even less is based on the campaigning activities of eager beer enthusiasts. Beck’s had a lot of success marketing a lager seen as “pure”. As the beer entered “cash cow” status on the growth share matrix and has entered almost permanent discount in supermarkets, alongside Stella and other big brands, it has seen a phenomenal success with its spin off “Vier” brand (a star), a 4% version. The Vier brand sells in the off trade at a higher price than its parent brand, and has in my observation become the cooking lager of choice in the on trade held back only by its limited distribution.

All of this is why I’m surprised at their current marketing giveaway. Giveaways are often used to promote beers. Guinness has a lot of success giving away t-shirts, rugby shirts & branded glasses. An activity where arguably what they give away assists in maintaining their own brand. The free t-shirt turns the customer into a walking billboard for the brand. The Beck’s giveaway is for “free mp3 downloads” at Play.com. Beck’s have long associated there brand with art. Whether this rubs the magic cloth of sophistication onto the brand is arguable. I happen to like Beck’s beer and drink a fair amount of it, but it is difficult for any beer on permanent discount to be considered sophisticated. I like it because it is a nice cheap drop of lout, not a sophisticated choice. The giveaway is unrelated to the brand, is a none tangible and also difficult to redeem. Redeeming a song is easy enough, redeeming an album involves “buying” each track individually, putting in the discount code to get it free then doing the same for the next track. It is also within the wit of most consumers to get free music anyway, if that is what they want. The promotion appears to benefit play, which are running it, as it showcases their own on line music store. It isn’t going to encourage me to choose Beck’s. They’d be better off putting a few more bottles in the box so when I see 3 boxes for £20; Beck’s is the one with more bottles than Grolsch or Stella.

Having said all that, I have 20 of these beer labels and I really don’t know what music to get. I have Lady GaGa’s last 2 albums anyway and that’s all I listen to. There doesn’t appear to be anything else I like. What’s a good bit of euro pop I should download “for free?” I like euro pop. I’m not afraid of being called gay. I have a tasty bird and a full healthy physical relationship with her. That defines my sexuality, not the fact I use man moisturiser (so I don’t get moaned at for borrowing hers), dress well and listen to camp music. I like anything that is as camp as Dale Wintons Xmas. You tell me what I should download.

i believe nadine coyle needs all the help she can get with her single.

She is the tidiest one of that girl band outfit. Bang tidier than "wor Cheryl", the nations sweetheart.

The thing is I like that sort of stuff to watch on 4music or Viva pop videos with the sound turned down.

A bit of Nadine Coyle is a nice warmer upper before an Alesha Dixon video.

You sound like the sort of chap who may enjoy the warblings of Mika....the campometer is cranked up to 11

I hear talk that the Xmas dominance of the freak-wrangler Cowell is to be challenged by a release for Frank Sidebottom's "Christmas Is Really Fantastic".

Buy 20 of those week before Xmas and give them to your friends as presents. Thank you.