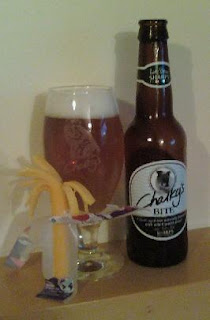 “Do not seek to follow in the footsteps of the masters. Seek what they sought”

A bit of beer and cheese matching ought to be in order. I’ve a fair amount of Pongy Ale knocking about the house, what people kindly sent me gratis, so I thought I’d crack a few. This stuff was from that nice chap Stuart from Sharps Brewery, who has his own blog here. I will get round to proffering my thoughts about all the grog I get sent, but you know, it takes time and all that.

Arguably one of finest cheeses on the planet is the cheese string. It’s the cheese that’s stringy, no less. You can play about with your food, offering a distinct advantage over lesser “traditional” cheeses that pong and suffer from “cheese flavour”.

This cheese was ideal with a delightful bottle of Chalky’s Bite. A 6.8% Classic aged beer. The bottle tells the story of Stuart & TV Chef Rick Stein attempting to create a beer like you find in Belgium and makes mention of 3 hops and a 3 month aging. One wonders whether they had thought of the option of just buying a Belgian beer, but heh that’s my inbuilt propensity to laziness passing unqualified judgement on 2 creative gentlemen with a passion.

The grog itself had a crisp fresh smell with a subtle sweetness that grew in flavour as you drank it. No harsh bitterness but a subtlety on the aftertaste that dried the mouth out. A lovely rounded quality that really brings out the joy of taking stringy cheese, pealing some off, and swinging it about a bit before you eat it. Bang on Stuart. 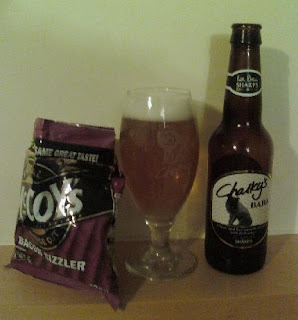 After that I was in the mood for a bag of crisps. Not just any crisp. McCoy’s bacon crisps. Man crisps. Crisps what men eat and not just because they were half price and cheaper than Walker’s. Chalky’s Bite, 4.5% aged beer with ginger is just the thing for man crisps.

I did read the bottle, but words like “the ginger works in synergy” remind me too much of an ex boss of mine who was a ginger and used words like " synergy” so I didn’t read further. This has a fruity smell, with a light subtle taste and lacking in strong flavours. Perfect with man crisps.

Both beers are bottle conditioned, which appeals to those that like faffing about letting beer settle, keeping it upright and pouring it gently. Bit of a bummer for louts like myself looking to neck beer without the faff. Still, it’s decent enough stuff.

So there you have it. 2 nice beers with 2 wonderful foods for the modern gentleman. Both beers knocked up by a nice chap with a brewery after talking with a celebrity chef and named after the chef’s dead dog.

Nice one as always!

i've not had a cheese string for years

Beautifully written and photographed. You should enter this piece in that beer writing comp-you'd be a certainty for a prize.

Thanks for the mention, anyway. I do get sent free cheese but so far not any cheese string. Or McCoys for that matter. I live in hope.

Never, have I felt so honoured. Rick is a big fan of Cheese Strings. He was going to feature Mr String on his food heros progamme but decided against it on the basis that he is a cartoon character.

The McCoys and Bark was the biggest "why didn't I think of that moment I think that" I have ever had. I am getting the label printers to adjust the text on the label this afternoon.

Gastronomy has a new Pope and he is known as Coookie.

Don't you draw faces on your cheeze strings, Cookie?

Ahh, damn! I just wrote a blog about beer and cheese but I totally forgot about cheese strings! I'll make sure to try harder next time.