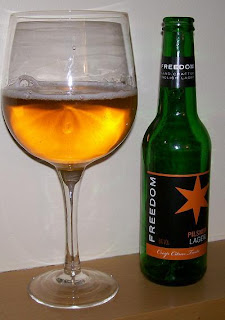 I was going to write and post this yesterday, but I couldn’t be bothered. Wasn’t in the mood. But Wednesday night I did actually get to watch a football match on telly and polish off the free beer, the glorious people at Freedom Brewery gave me. It’s nice when people take pity on a cooking lager enthusiast existing on a diet of cheap grog and gift him some quality stuff to neck. The final 2 beers being a 5% Pilsner and a bottled version of a 4% lager available in 50 litre kegs. Getting back from the gym, plonking in front of the box, cracking open a bottle of lout, switching the footie on. It’s what life was invented for.

Unlike the previous 2 beers, neither of these made any claims to being organic, so overall I was more inclined to like them before the first swig. Noticed this in the paper today about organic stuff. About a fella done for flogging none organic eggs as organic. Notice how he came a cropper? Not from punters eating the eggs and noticing they didn’t taste “organic”, but from whistleblowers in his supply chain. Says everything you need to know about the organic industry. There is at least one story of this nature a month if you read Google news. Often doesn’t make the national press, but you’ll find one in the local rag of any small town paper.

Anyway, the football and a beer. Of all the sports to watch on telly, footie is the one to watch in the UK if you are a beer fan if only for the commercial breaks. UK TV has a big problem attracting a male audience. Much of TV appeals to a female audience, apart from sport. So it’s on the footie where you get all the razor blade, car and beer commercials. Want to know how the lout hawkers are flogging lout to the masses? Watch the footie.

After a session in the gym I fancied starting on a proper hit of lout, so the 5% Pilsner was cracked open. Now I’m a proper beer blogger, a giant wine glass was the receptacle I had to drink from and retain my kudos in the world of beer. Zak Avery sets the standards and we all follow. Like apostles of a beery messiah, forming a church of Zak, the giant wine glass is our symbol of devotion and adherence. The giant wine glass affords the truest way of appreciating good beer, and even if it doesn’t it looks poncy enough to help us look like we know what we are talking about.

Swirling the beer around the glass, inhaling deeply and ignoring the raised eyebrows of my loving squeeze I detected a light aroma promising a crisp and fruity delight. The first swig revealed a dryness that gave way first to a fruity sweetness and settling upon the citrus acidity. Fantastic lout. The best so far. An authentic pilsner more in the style of a German than Czech Republic pilsner. Who says the English cannot make decent lout? The multidimensional layering of flavour revealed the lagering process it had undergone. A beer with real depth and complexity. The ingredients revealed the beer to be an all malt lager, evident in its taste to be honest. Upon polishing it off my considered opinion would be that this pilsner would be my preference over most of the imported premium pilsners on the supermarket shelf, and if ever I see it and am in the mood to pay more than tuppence, I’d certainly buy some. Though I am rarely in the mood to pay more than tuppence. The cheap Stella 4% offer in Sainsbury’s it is for me then.

This got me thinking as to whether I’d have ever tried this beer had the kind gentleman at Freedom not gave me a free sample. I usually buy cheap lout as I quite like bland one dimensional pisswater and I quite like paying tuppence. If I venture to the single bottle aisle, it’s usually a special offer and I’d usually be tempted by foreign lager brands rich in lager heritage. A Pilsner Urquell for example. But here I have a lager brewed in a country not known for decent lager, and I probably would never have tried it. Glad I did. How to market this beer among lager drinkers? Get ‘em to try it. Simple as or easier said than done, I could not say. Once a punter has swigged one, its quality is self evident. 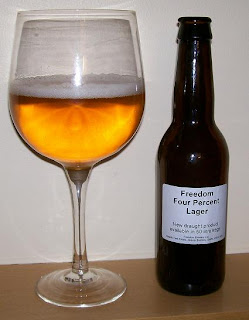 The 4% Lager I was especially honoured to receive. The other beers are available for purchase, though to be honest I’ve not seen them around the supermarkets. The 4% is a draught product; I’d presumably have to go into a pub to drink that. Considering the beer distribution in the UK I expect I’d have to go into a craft beer pub full of bearded types drinking cask ale in order to neck it. Somewhere lager louts like me wanting to watch the soccer tend to avoid. As a beer connoisseur, I poured the grog into my giant wine glass and did the whole swirling and sniffing. “Are you going to do that every time you drink a beer?” the squeeze asked. “Yeh I am, ‘cos I’m a beer enthusiast and beer blogger and it’s what we do. What’s more I’m going to jot in my notebook about it”

The main aroma of the beer is a malty sweetness with the first swig revealing a sharp crisp taste. A surprising amount of flavour for a 4% lout, drinking more like a full flavoured 5% glass of golden heaven. The crispness gives in to sweetness, revealing the beer as another of this multidimensional flavour experience you discover if you pay more than 20p a bottle. Arguably not as complex as the Pilsner, but I wasn’t expecting it to be. A delicious golden session able lout I’d be happy to neck a skinful of. I say I’d be happy to neck a skinful of it, but again I’ve not seen it about. I expect a small craft lager brewer faces a big challenge when it comes to distribution. As a punter I’d neck this 4% lout in a pub as a preference over any of the national brands, so long as they didn’t take the piss price wise. It wipes the floor with Carling & Foster’s and beats Beck’s Vier on not being German.

Any multi ale free house cask ale beardy weirdoes pubs looking for a quality lout to put on draft could do a lot worse. As a craft product it must tick all the hippy prejudice boxes against multinational industrially produced lout, and despite being a craft product it’s quite nice and not a glass of pong and thus normal people will like it.

Get it into pubs, I will drink it. Get the Pilsner in to Tesco; I’ll occasionally treat myself to it as a change from cheapo lout. Get the distribution, get punters to try it over a familiar brand, and the product speaks for itself. Lovely Lout.

From a wine glass?

The lady squeeze's I presume?

It's a giant one, you can fit a whole bottle of wine in. Zak left it when he popped round to video blog about lout, late last year. He also left a bin laden mask as well.

Top form! I think you qualify for a respect track. Yeah, you do. I let you know when it's up.

We'll be doing a 4% Freedom sampling at The Rake on the 24th if anyone wants to join us for some quality lout!

what has happened to you??

It's called selling out, B Dang. The trick to selling out is to do so cheaply. Price yourself to high and you may never get the chance. Sell out for a four pack of beer and you might find someone willing.