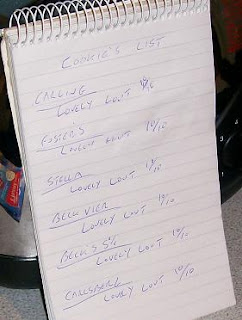 In part I have been inspired by the following load of nonsense I discovered and thought to myself, I’ll give that a go. Now I could make the effort of seeing this film before having a go at it but wasting hours of my life watching this load of old toss appears about as appealing as self circumcision. Probably more fun than reading a book about beer but only due to the fact that it ends sooner. So no I’ve not watched it and don’t intend to. But why bother? I doubt through watching it I’ll learn something new, so my time is better spent on more productive endeavour. If you want a review why not read this.

The rules of lout ticking are that you have to keep a list of the entire lout you’ve drank alongside tasting notes. Unlike beer ticking, lout ticking is not about having the longest list but having the most eloquent and succinct beer descriptions. The uniformity of mine gives it a resonance and reason beyond the literal interpretation of the words and elevates it to a higher art. That makes my list nicer than most shabby notebooks. The rules of lout ticking are based on beer ticking, but altogether nicer, ensuring you do not have to be weirdo to take part.

Also unlike beer ticking, lout tickers are allowed to have normal lives. We are allowed to dress nice, shave and wash regularly and have a girl friend and a sex life. This alone ought to make lout ticking a more attractive subset of the beer ticking fraternity. There is also a nice social side to it. Lout ticking can be a new and interesting way to make new friends. Now I’m not overly inclined to make new friends, but when a midget in a clown costume speaks to you to ask “what in crying out loud are you up to” I’m polite enough to give him the time of day. It’s not every day a bona fide midget in a clown costume (children’s entertainer, it turned out, having a pint before a gig) strikes a conversation up with you. Upon explaining the game of lout ticking he proffered the view that it was the dumbest thing he’d ever heard of but did himself admit to being a lout enthusiast and steering clear of pongy ale. There are brothers in lout everywhere in the world.

The important thing about lout ticking is that any lout is allowed to be on the list, so long as it is lout. NO none lout can be ticked. The beer has to be a pasteurised lager beer from a bottle, keg or can served under extraneous C02.

If I had a 'hobby' that a midget in a clown costume thought was dumb I'd consider myself to have issues!!

Come on Kristy, we all know that Stella is the king of lout.

Cookie, your survey left me with a quandary. On the one hand I think beer festivals are for showcasing beers with a difference. One's that you wouldn't normally get down the pub. For this reason I can't vote to accept any lout - it would be just pointless. Although a strict rule banning it does seem silly.

I vote to allow those that beards think are proper. But that sits uncomfortably because, as I say, strict rules seem daft. It should be up to the individual organisers to decide what style of festival they wish to organise.

Banning a beer just because it is filtered or uses bottled CO2 for dispense I do not agree with.

It was tempting to vote that lager is only for puffs, but I'd only do that to wind you up. Even I have found lager that I like.

@Dave, you can only vote according to your conscience. It is the only path of life that ultimately is without regret.

@Kristy, Not only the midget thought it dumb. When the squeeze arrived in the bar to start our valentines evening of romance she also thought lout ticking to be stupid. I might have a job getting this hobby off the ground and accepted as a legitimate part of the beer family. That ought not stop me trying, though.

Don’t you also need a camera to record your ticks and maybe take action shots of lout sploshing about in your glass? Lout and lauter?

Come on man! We've just added Prescotti to the mix, now you defame him???

@Adrian, all in good time my friend

@Whorst. I like Prescotti, imitation is the sincerest form of flattery.

True, I'm with you on that.

Herr'man thinks we've redeemed ourselves now because we've got Prescotti in the mix, as Prescotti is the only one in the trinity who knows what they're talking about.
Pongy ale no doubt makes one delusional.

Surely you should be seeking out the more obscure varieties of lout. Is Skol still available? What do you reckon to Holsten Pils, or San Miguel?

And all the various supermarkets' own-brand lagers are lining up for your delectation - you have a very long road to travel.

When will people understand that the primary function of drinking is not to wax eloquent about the earthy undertones of some obscure sludge but to get pissed.

I often drink cheap lager as it affords me the greatest opportunity to showcase my party trick - belching the national anthem.